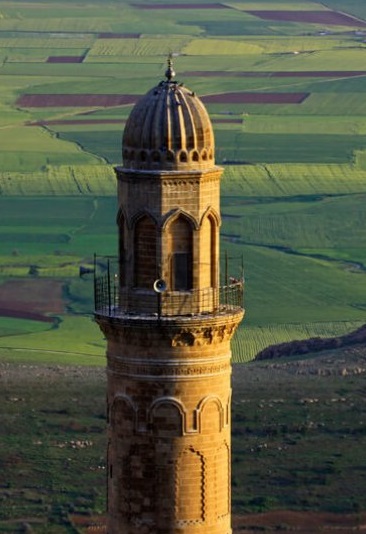 MEZOPOTAMIA – A PLACE WHERE IT ALL BEGUN

MARDIN-SANLIURFA-ADIYAMAN-GAZIANTEP
Mesopotamia, which draws people across its fertile land from the past to the present place where the history of civilization began; humanity abandoned nomadic life to become sedentary; humanity began to grow wheat; the first villages, towns, and empires were established; writing was invented.

The history of Göbekli Tepe, which causes a transcript of the history of mankind; Mardin’s lacy narrow streets; unsurpassed sunrises in Nemrut, the wonder of the world; Gaziantep, the city of mosaics; unprecedented historical artifacts in modern museums planted in cities like pearl drops ... In Mesopotamia, a country inhabited by thousands of archaeological treasures, everywhere you turn your head, you see history and culture.

A fertile land between the beautiful Euphrates and Tigris rivers, Mesopotamia has turned every seed into a bountiful crop for thousands of years. Spectacular gastronomic culture transforms these wonders into amazing flavors. Different colors tell the same story in the same way with a way of life, folklore and art fueled by diversity ...

Since when do we have this faith and desire to build temples? The country that has the answer to this question. Mosques, tombs, churches and countless temples of different religions ... Göbekli Tepe, which unites people with its faith in the heart long before the settlement and the beginning of agriculture. Holy cities scattered over lanlıurfi, the city of the prophets. Mystical atmosphere, domes on Mardin; a mosaic of religion and culture. Countless holy places in Mesopotamia and a state of deep thought that can only be felt by experience.

When you add to them hospitable people, excellent physical geography, an incomparable ecosystem with recognizable plant and animal species, everything is in place. Mesopotamia is an invincibly appealing center with the ability to add dozens of items to your “spoon list”.

Mesopotamia awaits you, the land of the first, the land of everything unique and ancient as time itself. Discover the legendary history and culture, extraordinary nature and unforgettable tastes in Mesopotamia.

Arrival in Mardin, after completing the border formalities, transfer by bus to the hotel. Hotel accommodation, dinner, overnight.

After breakfast departure to Midyat,. In Midyat we visit the old part of the city and the old Konuk Evi building, the highest point of the city. We then continue our way to the monastery of Mor Gabriel (Monastery of St. Gabriel), the oldest existing and one of the most beautiful Assyrian Orthodox monasteries from the 4th century with fantastic oriental architecture.

After sightseeing return to Mardin. Mardin is, among other things, a city specific in its appearance and location. It is located on one side of the hill, where the houses are arranged in stages, and from their roofs it spreads to the vast plains of former Mesopotamia, ie in the valley of two important rivers Euphrates and Tigris. Mardin played an important role in the development of Christianity. of the Orthodox Church. Its population consists of Arabs, Kurds, Syrians and Turks, and several languages ​​are spoken: Arabic, Kurdish and Turkish. From a religious perspective, it is a revival of both religions because Muslims and Christians live in Mardin, and different cultures have passed through this city. Each of them left behind many masterpieces. Return to the hotel. Dinner. Overnight.

Check-out from the hotel after breakfast. We start the day with a tour of the old town of Mardin and a visit to the Saffron Monastery of Deyrul Zafraran, one of the most important Orthodox monasteries in southeastern Turkey, dating back to the 5th century. Continuation of the road leads us to the archeological site Göbekli Tepe (Turkish for "belly hill"). The discovery of Göbekli Tepe, a UNESCO World Heritage Site, has called into question prehistoric knowledge. Continuation by lianliurfi. Check in at the hotel. Dinner. Overnight.

Breakfast. A tour of the city, which with its streets, houses, bazaars, baths, fountains, bridges, mosques, castles and city walls acts as an "open-air museum". It was also called the “city of the prophets” because it was inhabited by various prophets such as Abraham, Jacob, Job, and Eliha. We will visit the museum where we can see the oldest statue in the world and then head to the Halepli Bahce Museum where the remains from Roman times are located. Finally, we will visit the cave where the prophet Abraham was born, and Balikli naked, the place where the king threw him into the fire. Drive to Harran (now under UNESCO protection) and through the remains of the region’s oldest university and biblical city. Haran is characterized by houses that look like beehives, built in a circular shape of unfired brick, without the use of wood and with a vaulted roof. After the tour, you return to Sanlıurfa. Arrival at the hotel and dinner. Overnight.

After breakfast check out of the hotel and departure to Adiyaman. the first "Ataturk" hydroelectric power plant was built. Continuation of the route to the town of Kahta, where we will visit the extremely preserved, arched stone bridge of the Roman emperor Septimius Severus.

After the tour, continue driving to the starting point for the ascent to Nemrut. Nemrut is a 2134 meter high mountain and is best known for the archaeological remains of a large number of sculptures near the summit, which are believed to be the remains of the royal tomb of Antiochus I. Komagene from the 1st century BC. At the top we will greet the sunset and take a walk around the city. At the crossroads of Eastern and Western civilization, Mount Nemrut is certainly one of the most beautiful places. After visiting Nemrut arrival in Adyiaman. Hotel accommodation, dinner, overnight.

Breakfast. Departure towards Gaziantep we drive through endless pistachio plantations. Northeast of Gaziantep, on the Euphrates River, is the city of Eski Halfeti. It has since served as the set design for popular Turkish series. We will sail along the beautiful gorge of the river, and during the cruise we will see many half-submerged houses, trees, mosques, cultural monuments. On one of the peaks we will see the remains of a Roman fortress (Rum Kale) and then the sunken village of Savaşan Köyü with the famous half-sunken minaret of the Batik Mosque. Not far from Halfeti on a limestone rock at the end of the Euphrates River nests an endemic bird species, the Middle Eastern bald skewer - an endangered species of ibis. We continue to Zeugma - the museum of mosaics, it is the largest museum of its kind in the world. Continuation of the route to Gaziantep, the culinary capital and city of gastronomy, which the inhabitants call only Antep. If you ask the Turks about Gaziantep, everyone will immediately start talking about baklava. Due to its varied and delicious cuisine, in 2015 UNESCO included Antepa on the list of creative cities in the world. As far as cuisine is concerned, the Turkish capital of baklava has fully justified this status, because according to some free estimates, about every fifth baklava store in the central part of the city (there are over 180 of them) and the real miracle is how everything survives. Hotel accommodation, dinner, overnight.

After breakfast check out from the hotel and transfer to the airport.